It seems like, every cycle, this is the state that decides the election.  In fact, no one has won the white house without carrying Ohio since before FDR came to power, other than one miss – the 1960 election of John F. Kennedy (!).  This is not likely because the state’s 18 electoral votes are any more decisive than Pennsylvania’s 20 or Florida’s 29.  This is because Ohio is, in one state, the entire Upper Midwest.    To the east, there are aging, rusted out steel mills and an assortment of manufacturing locations not dissimilar to what goes on in Pittsburgh, PA and Wheeling, WV  To the south, there are bluegrass festivals and rolling hills filled with small towns not distinct from the towns of Kentucky.  In the west, apart from Cincinnati – the state’s most conservative large city – there are farms and even livestock, like you’d find in Indiana, and in the north, there are Toledo and Cleveland, which bear a striking resemblance to the crumbling crater that was once Detroit, with similarly ugly crime statistics, annual deficits and economic stagnation.  So, if you squeezed the Midwest up like a paper ball, you’d get Ohio – and you can’t win the election if you can’t make a dent in the Midwest, since every state in the region is heavily populated and packs double digit electoral votes.

So here we are – with positive momentum from the rumble and the crumble that was October 3rd’s presidential debate – and Romney’s probably flipped Florida, North Carolina, Virginia and Colorado.  Meaning he’s 13 electoral votes short of the oval office.  He can get those electors without Ohio, but here’s the question – do you suppose he can win Iowa Wisconsin if he’s unpopular in the ultimate Midwestern state (Ohio)?  So some will be saying that Ohio is not a must-win for Romney, but I would say that the nation’s electoral barometer will remain with its perfect batting average even so, because if Romney does not win Ohio, I don’t think he’ll win Wisconsin and Iowa…and the alternative would be for him to win an even tougher state like Pennslyvania or take down three small states that are tough to get (like New Mexico, Nevada and New Hampshire).  All of which is to say that either Romney is going to lose by a mere handful of electors…or he’s going to win by perhaps 50 and it will be called a blowout.

So let’s have a look at Ohio – how is the nation’s barometer looking over the last three cycles? 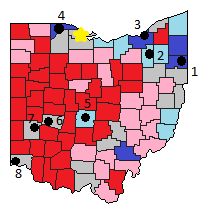 Note that the county best representing Ohio as a whole is Ottowa County – the southern suburbs of Toledo – directly at the intersection of Indiana life (and by extension the life of the Central Plains and Southern states balled into one amalgam) and the life of the corroding industrial belt that once powered places like Detroit and Cleveland.  Actually, the eastern half of Southern Ohio plays more like Appalachia, with a majority of registered Democrats, but with significant portions of that old democratic base now voting Republican in most elections, resulting in a slight, but pervasive and unchanging, conservative tilt.  So you can divide the state three ways – the Appalachian bordering piece that votes and looks much like WV, the rust belt counties that vote and look like Pittsburgh and Detroit, and the more pastoral chunk of the state that votes like Indiana.  But our representative county is resting right on the fault line between traditional Indiana living and the rust belt.  I would, however, urge you to look carefully at the conservative cities in Ohio – places like Cincinnati, Springfield and Dayton – to get a feel for how the state might break (Clark County, in particular – home of Springfield – very nearly took the top spot in the list of counties that predict state outcomes well).
Early voting suggests that Ohio’s population of registered democrats is down significantly from 2008 and that turnout in ultra-liberal Cuyahoga County is WAY off from the pace set by Obama’s ground game last time.  Which isn’t to say that Cleveland residents won’t vote…I’m sure the final numbers won’t be off by that much…but it does suggest a decline in enthusiasm among Ohio’s urban voters.
Here are the voting patterns of the last three election cycles by three-cycle-average county slant:

Ultra-liberal Cleveland, Youngstown and Toledo are losing population to places like Columbus, resulting in a reshuffling of the deck chairs.  Soon, Columbus may join Cleveland in bracket five.  If Ohio is a barometer for the state’s voting preferences, it may bode well for Republicans…the rust belt is collapsing and cities like Columbus are taking in the refugees, but in total, conservative counties have gained an extra percentage point of the state vote and liberal counties have lost a point, though the exchange comes at the cost of swing county votes being closer to the 50/50 line than they were before.  In general, ignoring Obama’s 4-point enthusiasm bounce and looking at the longer term trends, the state looks poised to remain hotly contested for the foreseeable future.  With Romney now within a point in most Ohio polls, this one will be worth watching closely on election night.

One thought on “Swingers: Ohio”