Despite being spammed by some swingers website using the term in its least attractive light, I’ll stick with the horse that brung me as the saying goes. 🙂

Today, we move on to the Keystone State – a state that in urban and rural towns alike looks war torn, a casualty of the death of American manufacturing and the victim of liberal political machinery in the cities and the total domination of the EPA over energy policy.  Here’s the perfect metaphor for you.  When you drive from DC to Philly (as my family so often does to see relatives in the NW Philly suburbs), you encounter a moment where the roads go from pristine to precarious.  At that moment, if you look to your right at the roadside signs, you’ll see one bidding you welcome to Pennsylvania.  The failure of PA state agencies to maintain infrastructure (roads, bridges, tolls and stable power) or provide adequate services like winter snow removal and sanitation echoes the failure of the Federal Government to provide adequate resources to the military or exploit the nation’s energy resources to keep us off of oil from the Middle East.  It’s not caused purely by the left’s obstructionism and poor budget-wrangling skills – if it were, than the roads in Maryland would be just as bad as they are in PA.  It’s caused by an unhealthy polarization – a stalemate between conservatives in the “T” (the rural counties at the heart of the state) and liberals in Philly and Pittsburgh over what the priorities of the state must be when setting a budget.  It’s a culture war that’s playing out all across this nation, but viewed in microcosm here, it looks particularly stark.  In the state legislature, there is constant division between two groups of people that simple do not understand the other side and make no effort to do so because their lives are too different.  Obama himself demonstrated the left’s refusal to really understand the people of the T when he famously accused them of clinging angrily to their guns, their religion, and their racism to deal with hard times.

So let’s take a look at the state over the last three election cycles and expand upon the divided (and difficult to change) landscape a bit further.  There is one crucial trend that may change the way the state plays in future elections, and we’ll look at that in a moment:

Representative County: Northampton (Allentown)
Users should note that we rated this county in slant grouping #4, but it BARELY crosses the 53% threshold and in previous election cycles has been much more of a swing county – which does perfectly represent the history of PA as moving from genuine swing state to left-leaner in recent years.

Liberals haven’t really tried to attack the state’s rural counties outside of college towns like State College (We Are…Penn State!) and crumbling factory towns like Altoona, Erie and Scranton in the last several Presidential elections.  But Republicans have opened up a new front in the war for PA’s 20 electoral votes, as demostrated by this trend map from the Election Atlas: 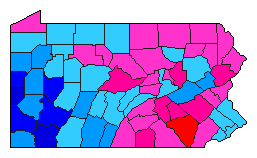 These trends are relative to the national average trend (if the national electorate moved 5 points left, and your county moved 1 point left, you’d get an R+4 trend).  And once again, this guy’s site is bass-ackwards, and shows liberal trends in hot colors and conservative trends in cool colors.  So what you’re seeing is the end of the era of the T.  As Pittsburgh collapses and its union presence travels elsewhere to blight another city with hopelessly expensive labor contracts and political corruption, the entire Western part of the state is trending hard right.  The suburbs of Pittsburgh, outside Alleghany County, moved 2-3 points left between 2000 and 2004, and another 3-5 points left between 2004 and 2008.  The same trend is occurring in the Eastern counties of Ohio – areas that used to swing more and are now voting like West Virginia (which has not chosen a Democrat President since Clinton and is polling further right this cycle).  In fact, our ground spotters in PA have been telling us all season long that the western part of the state is showing far more enthusiasm for Romney than they showed even for McCain, and the state polling agencies (as opposed ot the national outlets which bias a bit too heavily toward urban areas) are showing Romney holding much bigger leads in the Pittsburgh suburbs.
At the same time, the wealth of Philly is expanding west and filling in formerly rural parts of SE PA, and, as such, the upper-middle-class liberal vote share is increasing there, so the state is still not going to be easy to win.  But unlike a number of the other states I’ve looked at, the battle lines do appear to be moving here and it remains to be seen which changes will matter most in the long run.  If you take the state in aggregate, here’s what the numbers (by 3-cycle county slant group) look like:

Population-wise, there’s been some leakage out of left-leaning urban districts like Wilks-Barre, Scranton, Erie and Pittsburgh and some move toward swing towns like State College, Harrisburg and Allentown, with no penalty to the state’s slant behavior by group other than a modest Obama surge (less so here than other state).  It’s true, in fact, that Conservatives reacted negatively to Obama’s comments about them and rejected his national surge in enthusiasm, as did the Pittsburgh suburbs that are traditionally swing counties.  It was only in Philly’s swing counties where Obama got any kind of bounce.  The state does not seem poised to enthusiastically support Obama…if the challenger proves himself worthy, you could see things flip here.

For what it’s worth, my family out in Montgomery and Bucks counties has been claiming that the NW Philly suburbs are trending toward Romney  – much more street-sign presence for the GOP than for Obama.  To win the election, we’ll need to hold places like Bucks County, the Allentown area, and the Pittsburgh suburbs, and the youth vote in the college towns will need to drop.  Centre County leans right most of the time, for example, and leaned left for Obama due to increased youth turnout from Penn State.

With the landscape shifting, however, I actually think there is a better chance Republicans make progress here than in many of the other swing states we’ve looked at this far, with the possible exception of Colorado and Ohio.